Posted by MMM
On September 02, 2020 September 02, 2020
total of 118 apps have been banned by the ministry of information and technology, according to a statement. The move comes in the backdrop of fresh tension between India and China in eastern Ladakh. 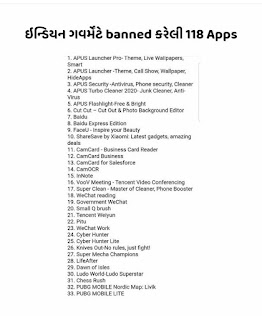 Here's the complete list of the 118 mobile apps that have been banned today:

India on Wednesday banned more than 100 mobile applications including the hugely popular mobile gaming app PUBG, after banning 59 Chinese apps in the first round earlier this year. The apps were banned citing concerns of data security after fresh tensions between India and China in the border area in eastern Ladakh.
A total of 118 apps have been banned by the ministry of information and technology, according to an official statement. The banned mobile applications are prejudicial to the sovereignty, integrity, defence of India and public order, the ministry said.
The banned apps include Baidu, Baidu Express Edition, Tencent Watchlist, FaceU, WeChat Reading and Tencent Weiyun, besides PUBG Mobile and PUBG Mobile Lite, the statement read. According to some reports, there are nearly 33 million active PUBG players in India, making it one of the most popular apps downloaded in the country. PUBG reportedly clocks 13 million users per day.
The ministry of electronics and information technology received several complaints from various sources, including reports about misuse of some mobile apps available on the Android and iOS platforms. The complaints alleged stealing and surreptitiously transmitting users’ data in an unauthorized manner to servers which possibly had locations outside India.
| IT ministry bans 118 more Chinese apps including PUBG: Here is the full list
“The compilation of these data, its mining and profiling by elements hostile to national security and defence of India, which ultimately impinges upon the sovereignty and integrity of India, is a matter of very deep and immediate concern which requires emergency measures,” the statement said.
The Indian Cyber Crime Coordination Centre, under the Ministry of Home Affairs also sent a recommendation for blocking these controversial apps. In the public domain too, there has been a strong demand for some time to take strict action against mobile applications that harm India’s sovereignty as well as the privacy of citizens.
The move will also safeguard the interests of crores of Indian mobile and internet users. The decision is a targeted one meant to ensure safety, security and sovereignty of Indian cyberspace, the statement said.
Earlier in June, the Centre had banned 59, mostly Chinese, mobile applications such as TikTok, UC Browser and WeChat, citing concerns that these are ‘prejudicial to the sovereignty and integrity of India, defence of India, security of state and public order’.