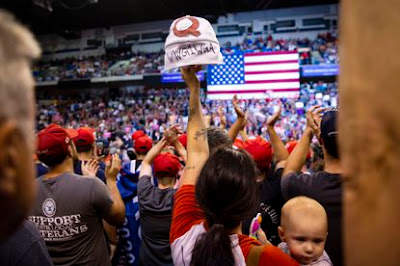 Democrats dismissed it as a fringe group of conspiracy-minded zealots. Moderate Republicans fretted over its potential to hurt their party’s image, while more conservative lawmakers carefully sought to harness its grassroots energy. Sympathetic media outlets covered its rallies, portraying it as an emerging strain of populist politics — a protest movement born of frustration with a corrupt, unaccountable elite.
Then, to everyone’s surprise, its supporters started winning elections.
That is a description of the Tea Party movement, which emerged in 2009 from the right-wing fringes and proceeded to become a major, enduring force in American conservatism.
But it could just as easily be a description of QAnon, the pro-Trump conspiracy theory that has emerged as a possible inheritor to the Tea Party’s mantle as the most potent grassroots force in right-wing politics.
This week, QAnon most likely got its first member of Congress: Marjorie Taylor Greene, R-Ga., who won a primary runoff in a heavily Republican district Tuesday. Greene has publicly supported QAnon, appearing on QAnon shows and espousing the movement’s unfounded belief that President Donald Trump is on the verge of breaking up a shadowy cabal of Satan-worshipping pedophiles.
[The latest] Joe Biden calls for a nationwide mask mandate: ‘This is America. Be a patriot. Protect your fellow citizens.’ »
QAnon, which draws its beliefs from the cryptic message board posts of an anonymous writer claiming to have access to high-level government intelligence, lacks the leadership structure and the dark-money connections of the early Tea Party. It also lacks realistic goals or anything resembling a coherent policy agenda. Its followers are internet vigilantes gripped by paranoid and violent revenge fantasies, not lower-my-taxes conservatives or opponents of the Affordable Care Act.
But following Greene’s primary win, some Washington insiders have begun to wonder if QAnon’s potential influence is being similarly underestimated. They worry that, just as the Tea Party gave cover to a racist “birther” movement that propelled conspiracy theories about President Barack Obama into the Republican mainstream, QAnon’s extreme views may prove difficult to contain.
“They’re delusional to dismiss it as a powerless fringe,” said Steve Schmidt, a longtime GOP strategist and campaign veteran who has become a Trump critic. “The Republican Party is becoming the home to an amalgam of conspiracy theorists, fringe players, extremists and white nationalists that is out in the open in a startling way.”
To be clear: QAnon’s ideas are far more extreme than the Tea Party’s ever were. Tea Party supporters objected to Wall Street bailouts and the growing federal deficit; QAnon adherents believe that Hillary Clinton and George Soros are drinking the blood of innocent children. While Tea Party supporters generally sought to oust their political opponents at the ballot box, QAnon supporters cheer for top Democrats to be either imprisoned at Guantánamo Bay or rounded up and executed.
But there are more parallels than you’d think, especially when it comes to how the political establishments of their times reacted to each group’s rise.
[The latest] Joe Biden calls for a nationwide mask mandate: ‘This is America. Be a patriot. Protect your fellow citizens.’ »
When the Tea Party emerged in early 2009, many commentators mocked the idea that it could ever achieve political power, calling it a “display of hysteria” by “frothing right-wingers.” Former Rep. Barney Frank, D-Mass., famously refused to engage with a conspiracy theorist who confronted him, saying it would be like “trying to argue with a dining room table.” Republican Party leaders took it more seriously, but they, too, seemed to think that they could harness its energy without indulging its more extreme elements.
Then, in January 2010, Scott Brown, a little-known Republican lawmaker from Massachusetts, won a Senate seat in a shock upset over his Democratic opponent, Martha Coakley. And it became clear to members of both parties that they had been wrong to underestimate the Tea Party’s potential.
Today, pundits tend to portray QAnon as an extreme but marginal movement — a kind of John Birch Society for the 4chan age. And some polling has suggested that the movement remains broadly unpopular.
But QAnon followers have left the dark corners of the internet and established a large and growing presence on mainstream social media platforms. Twitter recently announced it was removing or limiting the visibility of more than 150,000 QAnon-related accounts, and NBC News reported this week that a Facebook internal investigation into QAnon’s presence on its platform found thousands of active QAnon groups and pages, with millions of followers among them.
Even after Greene’s primary victory this week, few lawmakers have acknowledged QAnon directly. (One Republican lawmaker, Rep. Adam Kinzinger of Illinois, called it “a fabrication” that has “no place in Congress” on Wednesday.) But its followers have routinely used social media to push extreme views — including opposition to mask-wearing, false fears about child exploitation, and the “Spygate” conspiracy theory — into conservative media. At least one Fox News commentator has spoken approvingly of the movement. And dozens of QAnon candidates are running as anti-establishment outsiders in Republican primaries this year, just as Tea Party candidates did in the 2010 midterm elections.