Onam 2020 - An Essential Guide to the Festival of Kerala 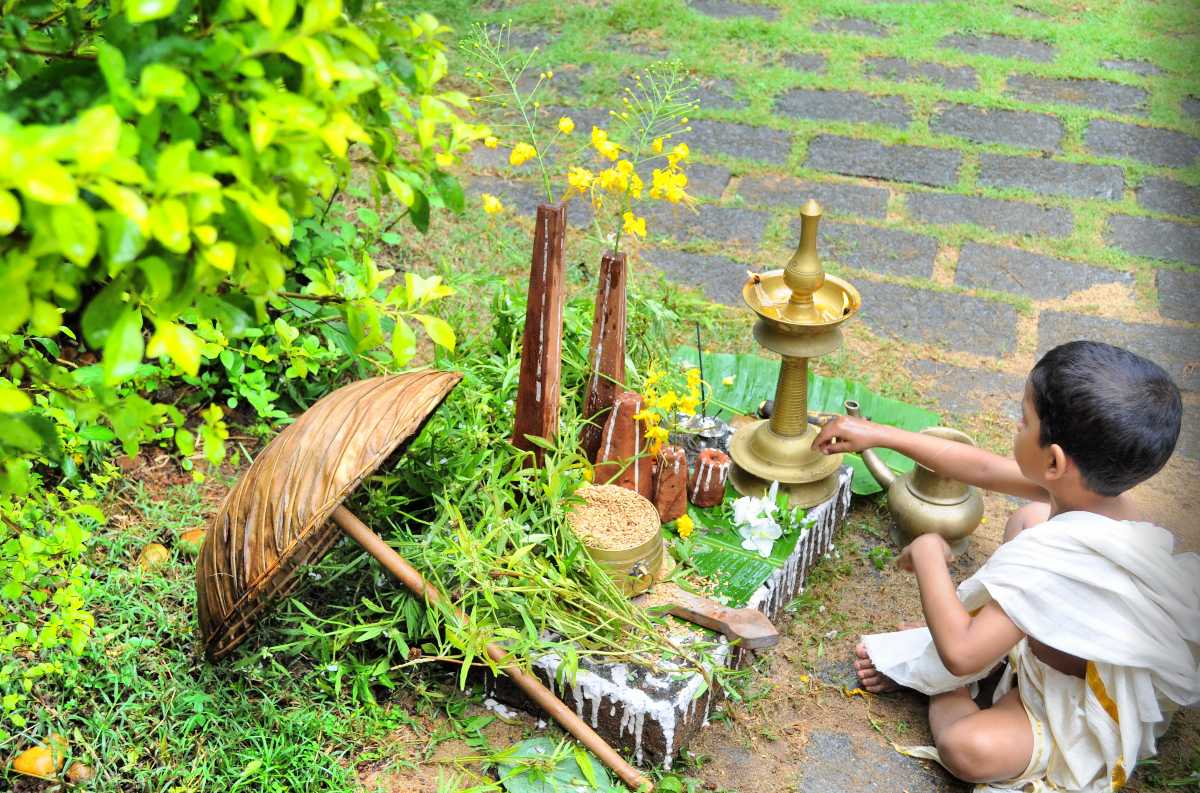 Onam is a Godlike festival from God's own country. It is the time of the year when Kerala is exhilarated with trumpets, drums, elephants, boat races, dances, art, music, floral decorations, lights, colours, rituals and the delicious Onasadya without which the celebrations are incomplete. Whether you're a Malayali or not, the spirit of Onam is Universal. Let's Arpo Irro, Irro! to the festival of togetherness.
Onam 2020 - The Festival of Kerala 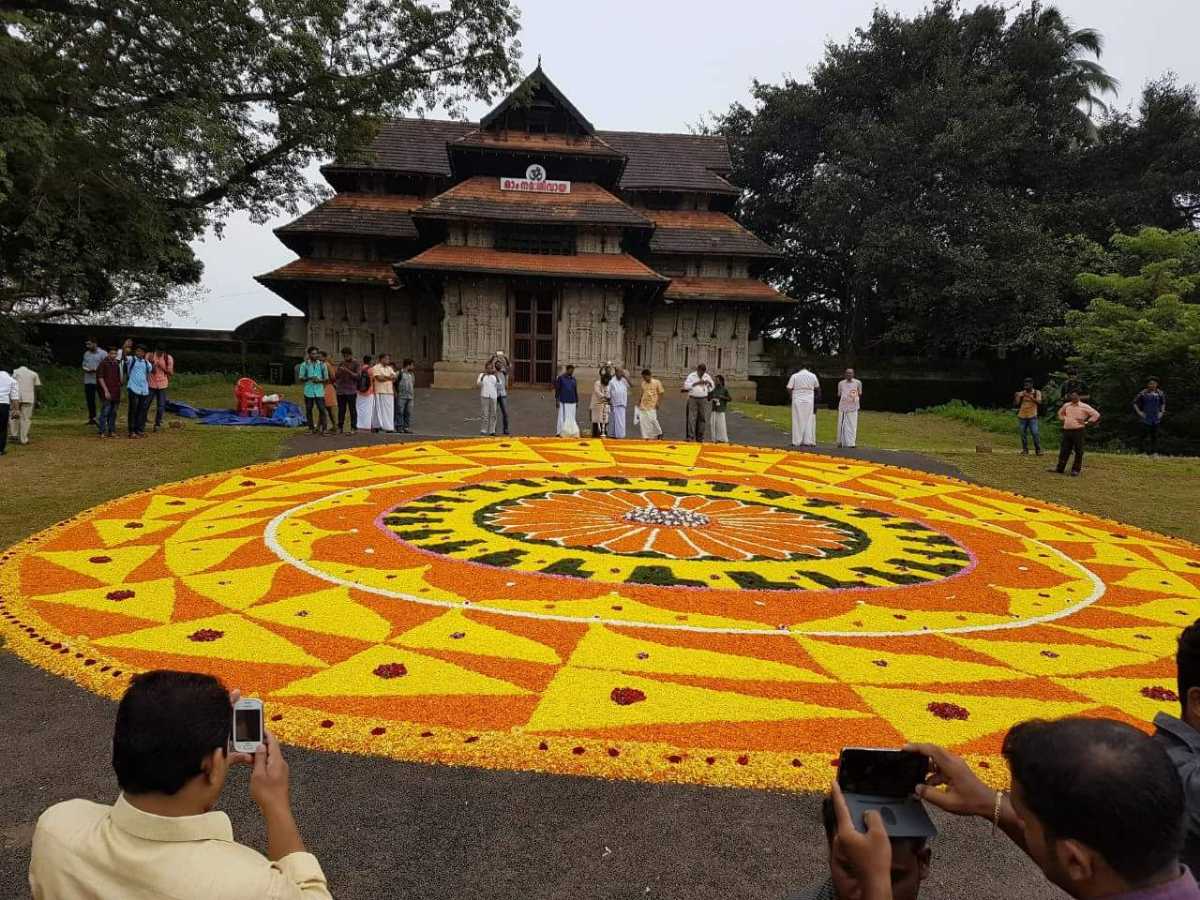 Onam is the traditional festival of Malayalees originated from the state of Kerala. Onam is a religious, cultural festival that's celebrated by the Malayali community around the world.

Onam 2020 DateFalling on the month of Chingam in the Malayalam calendar the festival overlaps with the months August-September on the Gregorian calendar. Onam 2020 will begin on
Saturday, 22 August and ends on Wednesday, 2 September. The most important day of Onam - Thiru Onam - will be celebrated on August 31st.

22 September 2022
History of Onam - The Legend and the Significance

The Mahabali legend that spins the tale of OnamAccording to Hindu Mythology, the Brahmin sage Prahlada had a grandson named Mahabali who took over the three worlds by defeating the Gods (Devas). In Vaishnavism, the Devas approached Lord Vishnu to help them in the battle against Mahabali, Vishnu refused considering Mahabali being a good ruler and his devotee. Mahabali performed a Yajna after his victory over the Gods and had to grant anyone any request. Lord Vishnu took this opportunity to test Mahabali's devotion and approached Mahabali in the avatar of a dwarf boy called Vamana.

The king offered everything he could to the boy, but Vamana refused and said one must not seek more than one's needs and all he needed was three-paces. Mahabali, although surprised by the boy's wish, agreed to grant it. Vamana grew and covered the land and water with one foot and the sky with another foot, now to place his third-foot Mahabali offered himself. Vamana trampled Mahabali down to Pathala (hell) but pleased by his devotion offered him a boon to visit his land every year. The revisit of Mahabali marks the festival of Onam.

Onam Festival - Cultural Celebrations, Rituals and PracticesOnam is welcomed with a diverse range of activities and celebrated with great pomp and enthusiasm. The life of the festival lies in its cultural practices with a repertoire of events ranging from boat races, dance forms, florals, colourful art, food and traditional clothing. 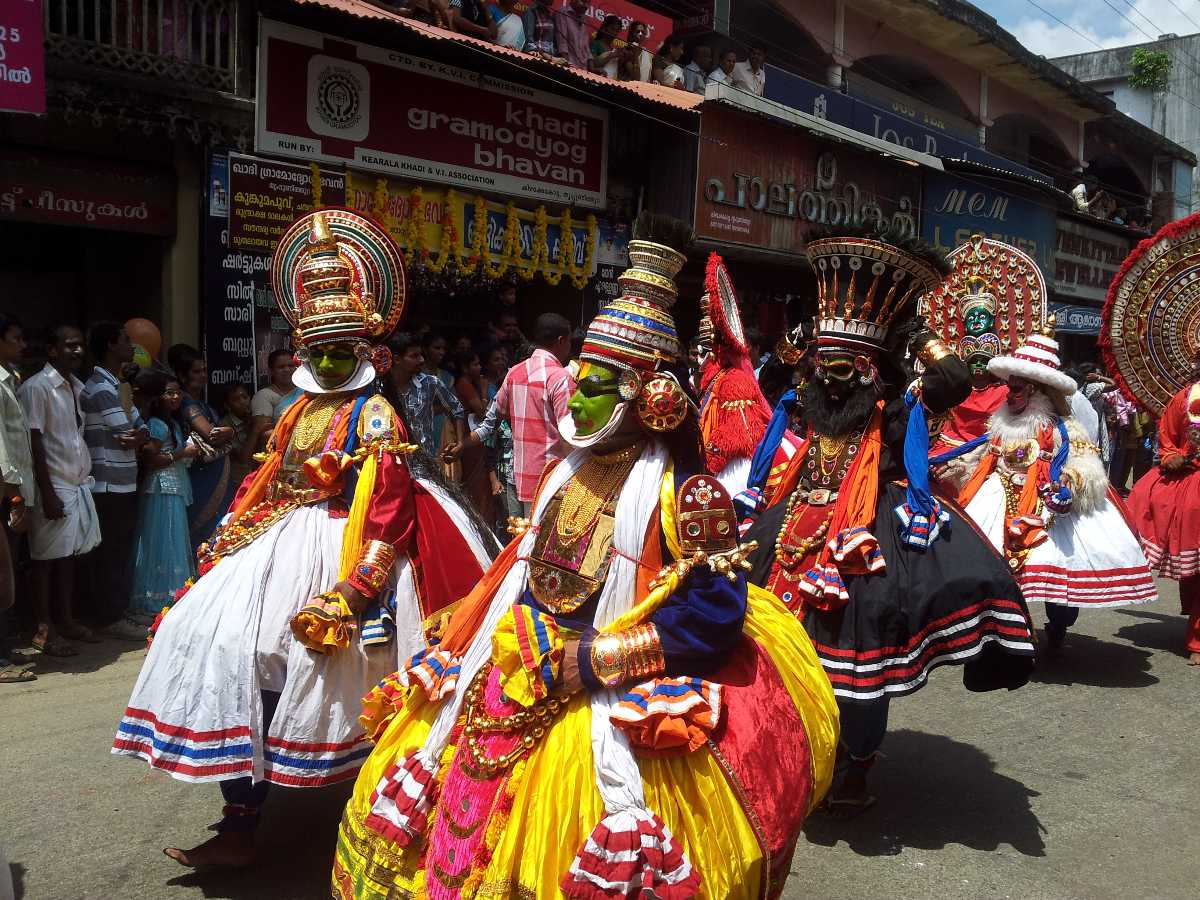 The onset of Onam is from the procession that starts from Thripunithara in Kochi. The parade features the culture of Kerala through elephant marches, drum beats, festival flag hoisting, folk art forms, colourfully decorated floats that depict scenes in Mahabaratha and Ramayana. Historically, the procession path leads to the temple from Thripunithara that's dedicated to Vamana the avatar of Vishnu. 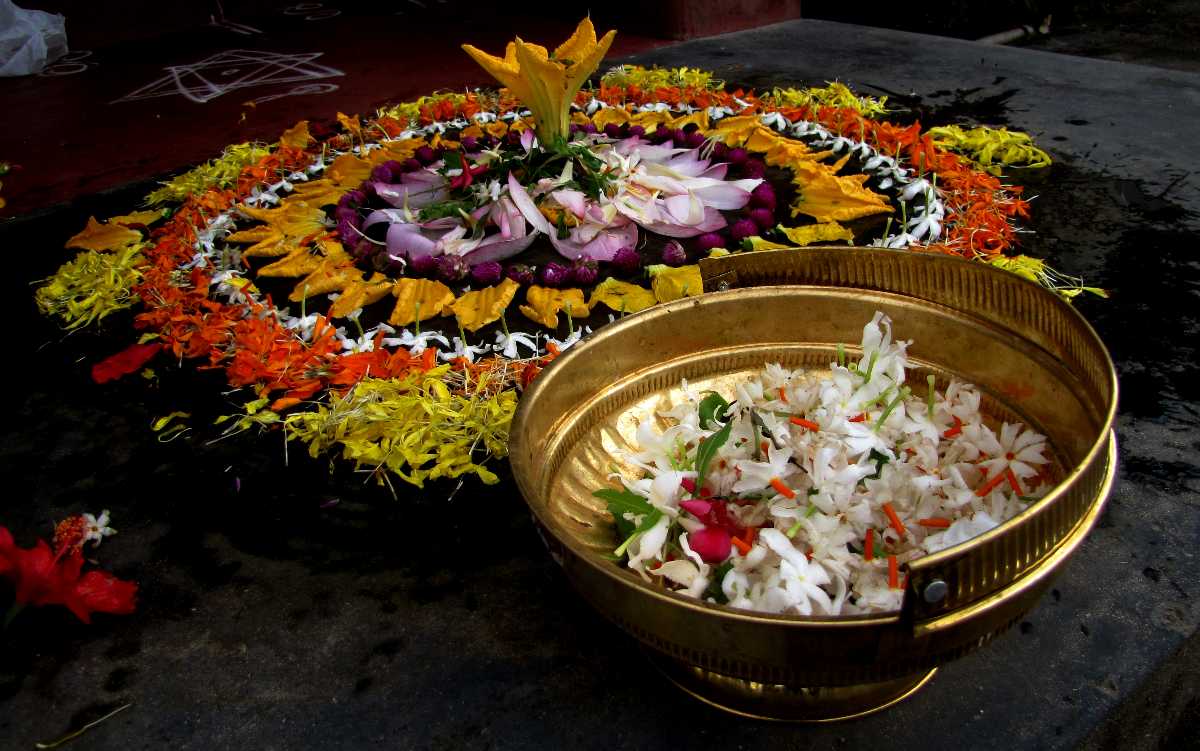 The Onapookalam is nothing but a floral carpet that's decorated with flowers and petals. It is filled with several varieties of flowers forming patterns on the floor of central entrances. Women arranged these flowers at their homes and in temple premises and decorated them with lamps on the edges or in the middle. It is a religious art that involves a lot of patience and creativity to blend the colours of petals to form a floral art. Pookalam is very similar to Rangoli that's decorated by people in other parts of India. There are Pookalam competitions held in all parts of Kerala.

Traditional DancesThe Kathakali, a traditional dance form of Kerala, is very fondly known by all. Apart from this, there are other dances such as Thiruvathira, Pulikali, Kummattikali, Thumbi Thullal, Onam Kali, which are performed during Onam.

Thiruvathirakali is a popular dance form performed by women on the day of Onam. This is accompanied by Thiruvathira Paattu which are the folk songs of Lord Shiva and Parvati. The group of women dance around the Nilavilaku (a standing lamp) showing the grace of the feminine. 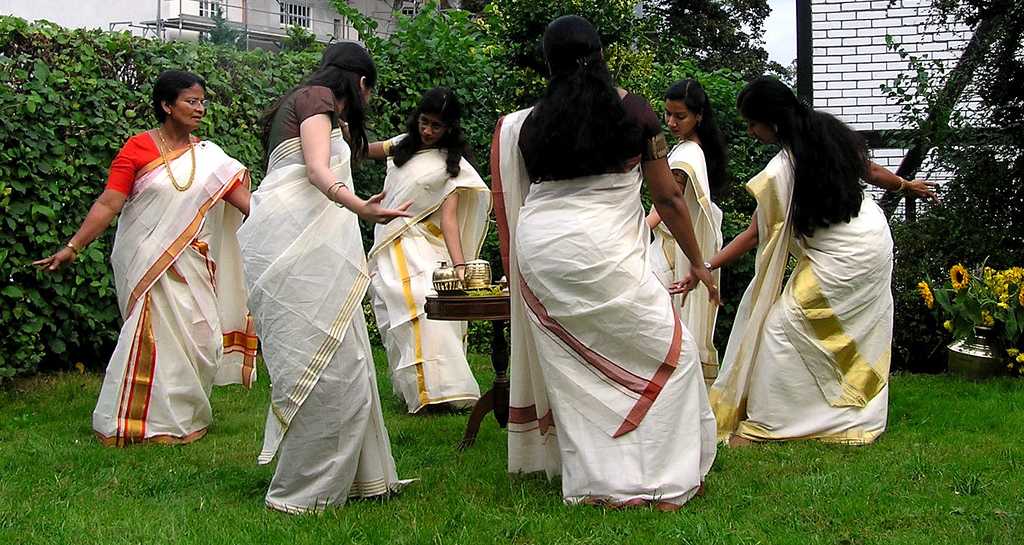 Kummattikali, on the other hand, is a dance with heavily painted colourful masks, that depicts Krishna, Narada, Darika and Kiratha. It is most prevalent in Thrissur district of Kerala.

Onam Kali is another form of dance where performers circles around a lamp and dancing to songs which depict tales from Ramayana.

Pulikali or Leopard dance is also known as Kaduvakali, is a recreational folk art form of Kerala. It is performed on the fourth Onam day where performers paint themselves as tigers in shades of bright yellow, red and orange and dance to the beats of traditional instruments like Chenda, Thakil and Udukku.

The traditional snake boat race is an essential event during the festival of Onam. It includes races of a various kind such as paddled longboats, snake boats and traditional boats of Kerala. Vachipaatu or the boat song is sung during the boat race to entertain the crowd and encourage the canoers. This event can be witnessed on the Pampa River of Kerala.
Onasadya - The Traditional FeastSource

The Sadya, meaning banquet in Malayalam, is a vegetarian meal that is served on a banana leaf. There are a variety of 29 dishes that are laid over the leaf with less or more number. The feast reflects the spirit of Onam with some items such as Rice, Sambar, Chips, Sharkaravaratti, Injipuli, Pappadam, Avial, Olan, Pickle, Dal, Thoran, Ghee, Rasam, Puliseri, Erisheri, Pachadi, Coconut Chutney, Moru and which ends with a sweet, savoury Payasam.In certain customs, a Palmyra tree covered with dry leaves surrounded by a wooden balustrade is erected in the temples. The tree is then lit with a torch that gets burned down to ashes symbolising Mahabali's sacrifice. Another custom is the swing slung from high branches, which plays an integral part in the rural areas. Young men and women sing Onapaatu and rock one another on the swings as a form of merrymaking.

Onam celebration spans over 10 days with numerous festivities. It is observed by most Hindus in its pure traditional form. The first ten days of Onam are the most important which begins with Atham.

Atham (22 August 2020)On the day of Atham, festivities begin at the Vamanamoorthy Thirrikara Temple in Kochi, where a grand procession is held called as Athachamayam. The day marks the preparations of the visit of Mahabali to his Kingdom. This is followed by the laying of Pookalam which is made of only yellow petals. The Pookalam on Atham is known as Athapoo which is made of only one layer that gets added on progressively as each day of Onam passes. Statues of Mahabali and Vamana are placed on the courtyards that are dung-plastered in front of the house.
Chithira (23 August 2020)On the second day of Onam, two more layers of orange and creamy yellow flowers are added to the Pookalam. People clean their houses and visit temples on this day.
Chodhi (24 August 2020)The third day of Onam is when people buy new clothes otherwise called as Onakkodi. Women dress up in Kasavi Saree, and men purchase mundu while young girls wear Pattu Pavada. Families go shopping as well as gift each other jewels and clothes. The third layer of flowers is added to the Pookalam as well.
Vishakam (25 August 2020)This day is considered as the most auspicious as the Onasadya preparations commence. The woman in the family stock up ingredients from the market. Usually, markets hold their harvest sale during this period making Kerala markets the busiest place. The dishes go up to 26 - 30 in different families. After all, Onasadya is all about filling the plantain leaf with dishes until there's no space left.
Anizham (26 August 2020)The Vallamkali or Snake boat races flag-off on the Pamba River and the Pookalam grow bigger.
Thriketa (27August 2020)Fresh flowers are added to the Pookalam and families visit their ancestral homes and spend some time, exchange gifts etc.
Moolam (28 August 2020)Most temples start offering Onasadya on this day. Families prepare a shorter version of the Sadya. The Pulikali and Kaikottukali are performed at various places in Kerala. The state starts getting colourful and busy with celebrations.
Pooradam (29 August 2020)The day begins with the ritual of installing clay statues of Mahabali and Vamana commonly called Onathappam in the centre of Pookalam. They are the representation of Mahabali, and fixing these statues symbolises an invitation to Mahabali to visit each house. By now the Pookalam is much bigger and complex.
Uthradam (30 August 2020)

This is considered as the Onam even when the preparations reach its zenith. The devotees fully prepare themselves to welcome King Mahabali the next day.
Uthradam/First Onam (30 August 2020)This day is the eve of Onam and considered as the First Onam. It is the most auspicious day to purchase fresh fruits and vegetables. According to traditional beliefs, Mahabali arrives in Kerala on this day. Hence, people clean their houses and do their final Onam shopping.
Thiruvonam Onam 2020 (31 August 2020)The main day of Onam festival when people apply rice flour batter on the entrance of their houses as a traditional welcome sign, take a shower and dress up in new clothes and also distribute alms to the poor and needy. This is the day King Mahabali visits each home and blesses every family in Kerala. The Pookalam is completed perfectly, and the families gather to feast on the Onasadya.