International Left Handers Day is day set aside each year to celebrate people who go through life predominantly using their left hand. 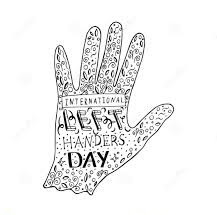 Yes, there's a holiday for everything, and for the past 30 years now, Left Handers International has dedicated August 13 to raising "awareness [about] the everyday issues that lefties face as [they] live in a world designed for right-hander," according to the group's official website.

Over the past few decades, this day has been marked by left-versus-right sports matches, a left-handed tea party, and in the United Kingdom, nationwide “Lefty Zones” where right-handed people are encouraged to try out everyday left-handed objects to see just how awkward it can feel using the wrong equipment.

In all seriousness, these events have led to product redesigns with left-handed people in mind, and that's a win for everybody!

In honor of the uniqueness of left-handers around the world, here a few facts that you may not have known about this portion of the population, according to Left Handers International:

"The Simpsons" creator Matt Groening is left-handed, and he made the lead character of the long-running animated series, Bart Simpson, left-handed as well.
Left-handers tend to perform well in tennis, baseball, swimming and fencing.
Most left-handers draw characters facing to the right.
In sets of twins, there is a high chance the at least one of them will be left-handed.
There's even a free club you can join if you're left-handed, called The Left-Handers Club.

Now armed with this new information, you're ready to celebrate your left-handedness, or the left-handed person in your life.

Now in its 17th year, the day has been celebrated with right vs. left sports matches, left-handed drinking events and other activities, the club says.

In honor of the day, some tidbits about sinistrality:
About that name

Sinistrality is the formal name for left-handedness and carries quite a history.

It's based on the Latin word "sinistra," for "on the left." But as time wore on, it began to accumulate associations with evil that persist today.

Throughout the ages, left-handedness has been associated with weakness, impurity or evil. Today, few would consider the left-handers in our midst evil, but they do have to endure numerous inconveniences of a right-handed world.